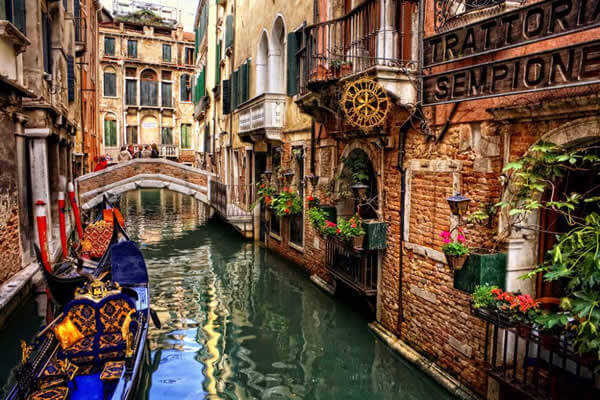 It’s well and truly winter, time for some Londoners to start thinking of a trip to Venice. In February it’s time for the annual carnival, which is a nice way to stave off the seasonal chill. But before that, the city is quieter and less crowded, and you’ll pretty much have it to yourself. Be warned, though: Venice in winter is extremely cold and damp, much more so than London. As residents often say, Venice is a coastal city with a continental climate.

There’s another sort of damp which you’ll encounter in Venice, a sort which occurs all year round, and with increasing severity: rising damp. The Venetian variety is different from its London counterpart. It’s rather special, and to understand why, you need to consider how the city was built.

The city of Venice consists of low-lying islands within a large saltwater lagoon, where the rise and fall of the tide is relatively modest. Resourceful early Venetians developed a unique system of construction adapted to these conditions. Traditionally, foundations of the buildings are long wooden piles, typically 60 feet in length, placed as closely together as possible, which are driven through the underlying mud until they reached the layer of hard clay beneath. Two layers of wooden planks are laid on top of the piles. On top of this construction is a layer of Istrian stone, a type of marble impermeable to water. The top of this stone layer is meant always to be above the level of the water, even at high tide. Finally, brick walls are built on top of this unique construction.

The wooden piles, always below the water and mostly buried in the mud, do not rot as they would if exposed to air, and gradually harden over the centuries. The waterproof Istrian stone layer acts as a damp-proof course on which the building rests. Or at least that was the intention when the houses, churches and other buildings were originally constructed.

The problem now is that–as everyone knows–Venice is sinking. This has been happening for centuries, very slowly, as the land mass has been tilting downwards and as sea levels have risen. However, the process has been accelerated in recent years by more rapidly rising sea levels, as well as by other endeavours such as the digging of artesian wells (now banned). The industrialisation of the adjacent mainland has also aggravated the situation by removing large areas of salt marsh that previously absorbed a lot of the water at high tide.

These days, the water level in Venetian canals now more or less reaches the top of the protective stone layer, and often submerges it completely during high tides. This means that the brick above it sits immersed in sea water for several hours a day, during which time salt water seeps up the porous brick by capillary action. That picturesque appearance you see around Venice with large areas of exposed brick next to walls with patchy areas of paintwork is the result of this destructive process.

Salt of the Earth

If you look more closely at the walls, you will see that the brick has eroded and crumbled, and if you look more closely still, you will often see a white deposit on the brick. The white deposit is salt from the Venetian lagoon, left behind after the water has dried out. You can confirm this by breaking off a bit and tasting it; an excellent party trick with which to impress your fellow travellers.

It’s sad but true to say that the city of Venice, perhaps the most beautiful city on earth, is threatened by many things. And one of these is rising damp.

This article was written especially for the London Damp Company blog by Dr PH Lee, Radiologist, Art Historian and Venetophile. Discover more of his musings about Venice here.

London Damp Company has been protecting homes from damp in Central, West and South London for the last twenty years. We’re experienced surveyors and builders with a meticulous approach and a craftsman’s attention to detail.

Your details will only be used by London Damp Company and are never passed on to marketing organisations.